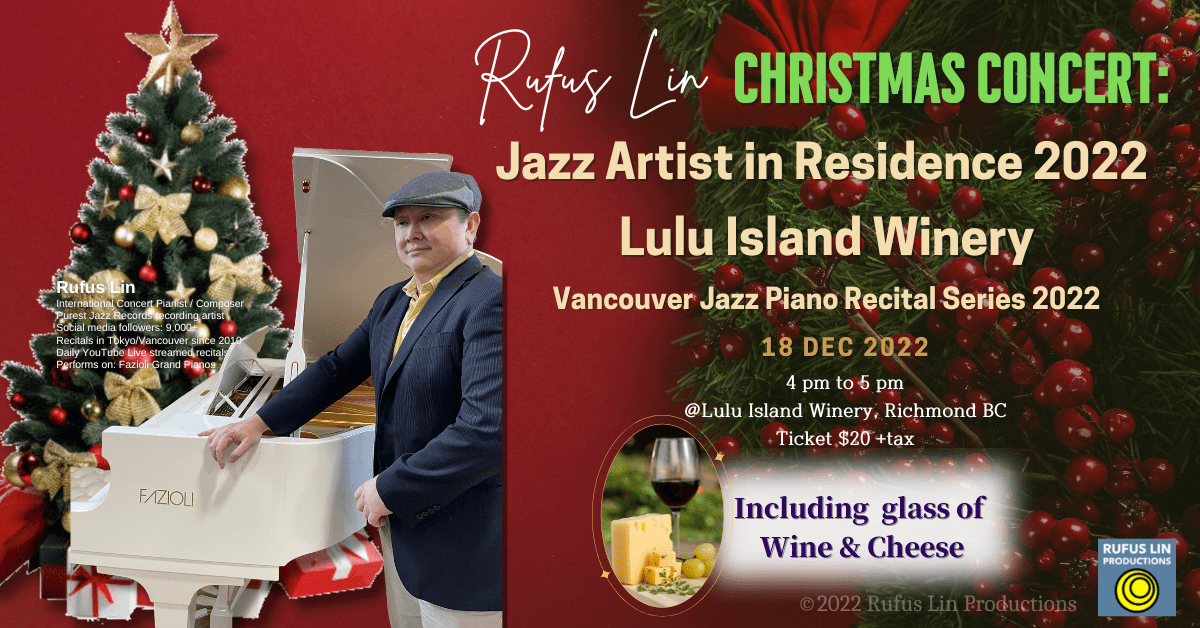 International Jazz Concert Pianist Rufus will be giving a solo jazz piano recital series every month at two locations: the Lulu Island Winery and the Shaw Tower Lobby in Vancouver in 2022.

Rufus will perform on one of the world’s most exclusive pianos, a Fazioli grand piano. Fazioli was the instrument played by this year’s International Chopin Piano Competition winner Bruce Liu, of Canada.

Canadian jazz pianist Rufus Lin is widely known in Tokyo, having given over 100 solo jazz recitals there over 11 years. Most of his fans live in Japan and South Korea. He has been a resident of Richmond BC since 1999.
Rufus’ decade long concert series in Tokyo ended when the Covid-19 pandemic began, so instead he has been live-streaming his concerts on the Clubhouse, YouTube, Facebook and Instagram Live streaming platforms. He has a social media following of over 9,000 people worldwide.

We use cookies on our website to give you the most relevant experience by remembering your preferences and repeat visits. By clicking “Accept All”, you consent to the use of ALL the cookies. However, you may visit "Cookie Settings" to provide a controlled consent.
Cookie SettingsAccept All
Manage consent

This website uses cookies to improve your experience while you navigate through the website. Out of these, the cookies that are categorized as necessary are stored on your browser as they are essential for the working of basic functionalities of the website. We also use third-party cookies that help us analyze and understand how you use this website. These cookies will be stored in your browser only with your consent. You also have the option to opt-out of these cookies. But opting out of some of these cookies may affect your browsing experience.
Necessary 常に有効
Necessary cookies are absolutely essential for the website to function properly. These cookies ensure basic functionalities and security features of the website, anonymously.
Functional
Functional cookies help to perform certain functionalities like sharing the content of the website on social media platforms, collect feedbacks, and other third-party features.
Performance
Performance cookies are used to understand and analyze the key performance indexes of the website which helps in delivering a better user experience for the visitors.
Analytics
Analytical cookies are used to understand how visitors interact with the website. These cookies help provide information on metrics the number of visitors, bounce rate, traffic source, etc.
Advertisement
Advertisement cookies are used to provide visitors with relevant ads and marketing campaigns. These cookies track visitors across websites and collect information to provide customized ads.
Others
Other uncategorized cookies are those that are being analyzed and have not been classified into a category as yet.
保存して同意